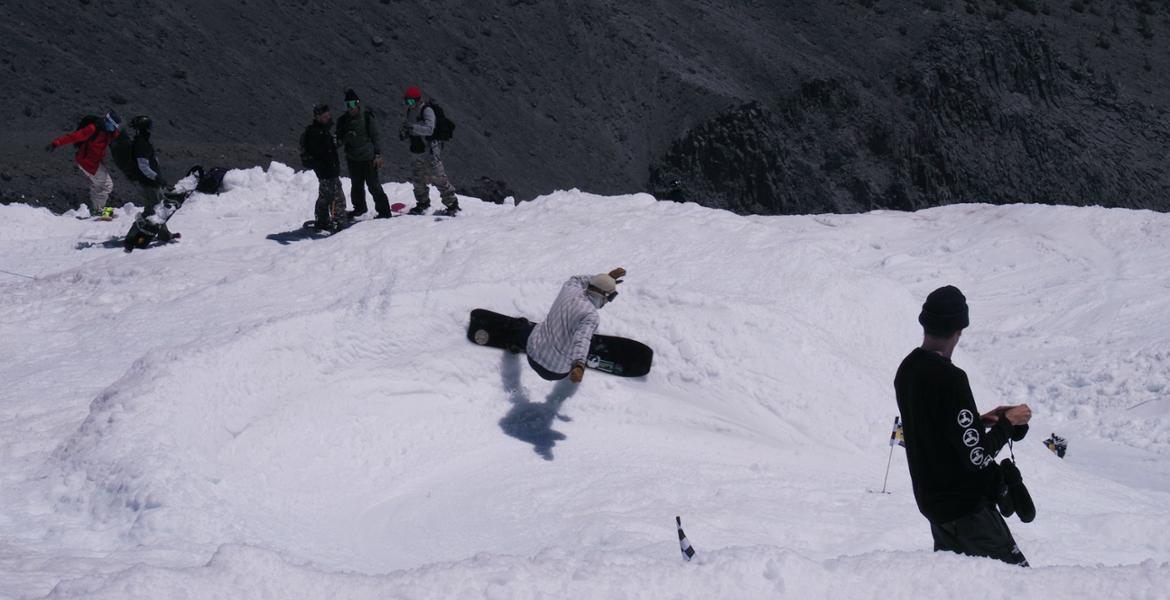 Well, it seems that you can have as much fun as you want, as long as you stay true to your convictions and don’t lose sight of your goals, I guess. And the guys at Drink Water got it figured out, if you ask me. Saving the world is a little overrated, I think. I mean we might even be doomed anyway with all the shit that’s happening right now. So to make as many changes as we want/can, that’s the focus here. So hell yeah, I dig the leitmotiv. Let’s make a difference and have a blast while we’re at it. Got it. Sorry for this much too to profound intro, back to snowboarding. I say, if there is one event that showcases that state of mind the better, it’s defnitely the Drink Water Rat Race. It’s hard to imagine a better way to act for a cause, be effective and have as much fun while doing it. I’m not saying they’re the first or the only ones to do it, I’m just saying the Rat Race is rad!

So here’s how it goes:

The whole Drink Water project sets the tone perfectly. A snowboarding business that promotes the key concept of simply drinking water (rather than energy drinks) and donates a portion of its proceeds to bene t people who fundamentally need access to clean drinking water. You got it!

Mt Hood, the ideal mountain it seems. It’s pretty much the centre of snowboarding in the summer season. If you avoid the instagram pictures of powder slashes in the southern hemisphere at least. Besides the fact that clean water flows endlessly here, the setup is perfect up on the glacier. Freestyle snowboarding at its best. And with the Timberline crew letting these crazy minds create the craziest course, well you have the perfect set up. Oh, and it is probably the gnarliest bank slalom you’ll ever witness in your life if you have a chance to come.

Tight corners, steep turns, slots, little rat holes, jumps here and there, curbs to jump, whoops by millions. You go in there without a minimum of board control or just slightly out of focus, you’re a dead man. The word radical suits it pretty good. You could easily be capable of sliding the steepest street rail, jump the longest jump or the highest cliff and very well not be able to finish the course... Those who end up the finish line charging all the way are the ones who can make a tight turn just after passing a board-sized slot and then inhale an army of whoops. And this over and over again from start to finish.

Okay so once you have all that, what you need the most is the crazy ass snowboard community!!! Whether it’s the people who donated, the brands that believed in the project, the volunteers, the family barbecuing, the crowd here cheering all day or the riders risking their life in the race, I think we are touching the core value here. Seriously I’m not sure I’ve ever witnessed so many people helping to build a set-up for a snowboarding event. Very cool. About the actual race, well, the fastest man of the day was the legendary Terje Haakonsen, of course.

I guess waxing your board and sharpening your edges for an hour and a half the day before when everybody else is eating pizza and drinking beers kind of helps... Hailey Langland got her priorities all figured out too. She sneaked out of her olympian training to come and race, and win for the third time in a row. I guess she’s busted now and most certainly ready for the Olympics! JD Dennis won again as an unsponsored rider and might not be allowed to register again in this category next year. Got to drop with the big guys now! Oh and just for the memo, Max Warbington dropped by for one run, and just did the whole thing switch... Beast.

One thing for sure, so many different styles of boarding were represented and were part of the fastest riders on the hill that day. It’s a pretty cool thing to see street guys like Jake Kuzyk and Forest Bailey in the top ten next to big mountain riders, backcountry gurus and turning masters. This alone actually got them to play roshambo to win a Aesmo snowsurf!

Anyways shout outs to all the riders that charged down this crazy course! I guess once you did all that, all you need to do is to talk about it, spread the word and hope people will get touched and decides to contribute. Oh, and there is still time to donate to water.org by the way...

A big thanks to Austin, Bryan, Stephen and the rest of the Drink Water Gang for making it happen!