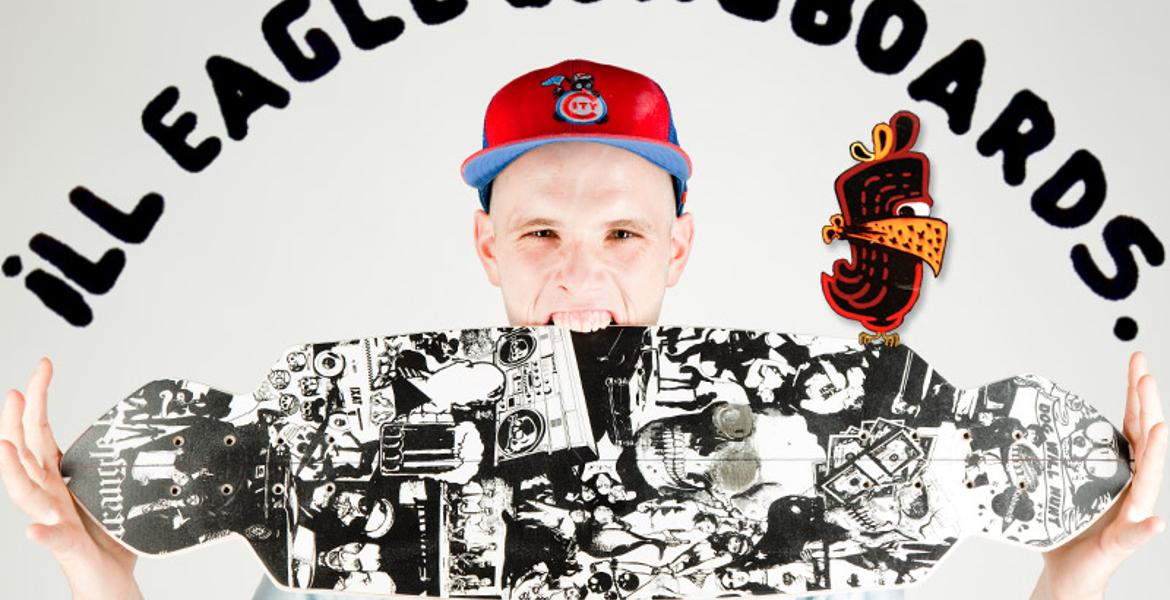 In this day in age, the reality of our actions is quite apparent. We are creating too much damn waste and the snowboard industry is not exempt. Most choose to ingore the facts and carry on in ignorance, others get drastic and run off into the woods to live off leaves and worms, and others still take a look at our mountains of garbage and turn them into gold. Juergen Gritzner is one of those people. He has given old snowboards a second life by starting Ill Eagle Longboards. Reduce, Reuse, Reride...

How long have you been making skateboards out of old snowboards? What made you decide to start?
I have been shaping them for 9 years now. The idea of taking a snowboard off the snow came to me when I took my dog for a walk in the woods, when I was 13 years old. It was late autumn and leaves covered the ground like deep powder. I decided to throw myself down a steep leaf-filled halfpipe on a snowboard without bindings... it was BAAANGIN'! It worked really well and was superfun. I was so pumped on the discovery of an alternative use of my snowboard that I tried to find more. When I got back home I tried to put skateboard trucks on my board but immediately realized it wouldn't work unless I cut the snowboard down. Inspired by my brother's longboard, which he had brought back from a surf trip in France, I shaped my first longboard out of an old snowboard. My brother tried it and was immediately hooked, so I started shaping longboards for friends with their old beloved snowboards.

I started selling my boards when I was 15. As time went on I developed new creations, shapes and designs. During this time I learned a lot about the fucked up ways of mass production, which are also true in the board sports industry. Thousands of second-class goods are getting thrown away every year, like brand-new snowboards simply because of graphic defects or a minor blemish. Not much of an attempt was being made to save or re-use these goods. Today I work together with companies like Nidecker, who support my attitude of re-use. They send me their waste to get recycled into rideable art.

Are you a dumpster diver or an eco-conscious person who believes it's very important to give things a second life?
I was always too lazy to search for food in the garbage, but I learned from other creative types that there is a lot to find in dumpsters if necessary. I have a deep connection to nature so yes, I am eco-conscious and I don't believe, I know we are surrounded by stuff that we can easily recycle. Industry has made it so that new things cost less than repairing old ones and people have have developed a habit of simply throwing out instead of considering repairing or reusing anything.

What are advantages of making skate boards out of snowboards? Any disadvantages?
A big advantage is good snowboard companies use the latest technologies with quality materials to create the perfect flex.  Skateboard companies just can't compare to this level of research and development. A disadvantage is cheap brands use cheap materials, so I have to spend time relaminating with fiberglass and epoxy to create a long-lasting board.

Where do you find your new boards?
I don't have to search anymore, they find me! Snowboard heads that love their old boards give them a second life by turning them into a new longboard. Snowboard companies send me their factory seconds and distributors give me damaged boards.

Do you have a favorite you have made? Maybe something from super old boards?
I love every board I create like it was my own because each one is totally unique and interesting in its own way. One of my overall favorites was a yellow Stepchild with shark bites left and right of the front truck. Another one was an old snowboard autographed by Kevin Jones that Stefan Gimpl gave me.

Can people send you boards? And if so, do they get a discount on a Ill Eagle skateboard?
Sure! People can send me their loved ones, but there is no discount. I don't pay for the boards I get from companies so I don't want to charge people extra money if they don't have an old snowboard. I take money for my handiwork and artistry, not for stuff that is sent to me.

Where can someone put in an order or contact you to send you their snowboard?
E-mail me at [email protected] or find me on Ill Eagle facebook page. The website is in progress.

Have you ever left the bindings on from the snowboard on one of your skateboards and strapped in at the top of steep hill, said fuck it, and just pointed it? Or is that a bad idea?
Yes, I did! I was feeling gnarly and I jumped around on the board, going high as possible doing all kinds of snowboard moves. It was awesome but the fun ended when I realized I was in middle of a steep downhill, still not able to do proper powerslides and still strapped in! I was lucky enough to find a "soft" grass spot to explode into like a bomb, away from the street.

Any plans on expanding production or doing some events in the future?
I have a lot of plans for future events like exhibitions and collaborations with other artists plus jam sessions, videos, mobs and other funky happenings that help push our culture and attitude. Plans for expanding production are unnecessary. ill Eagle is growing bigger organically, with me, with where I am at and where I am at is where the Eagle is. I'm simply trying to express creativity and love with these boards. They are unique and only a few wise souls will get to enjoy them. I've always tried to stay as far as possible away from corporate, impersonal work. So the ill Eagle will remain underground, now and forever!