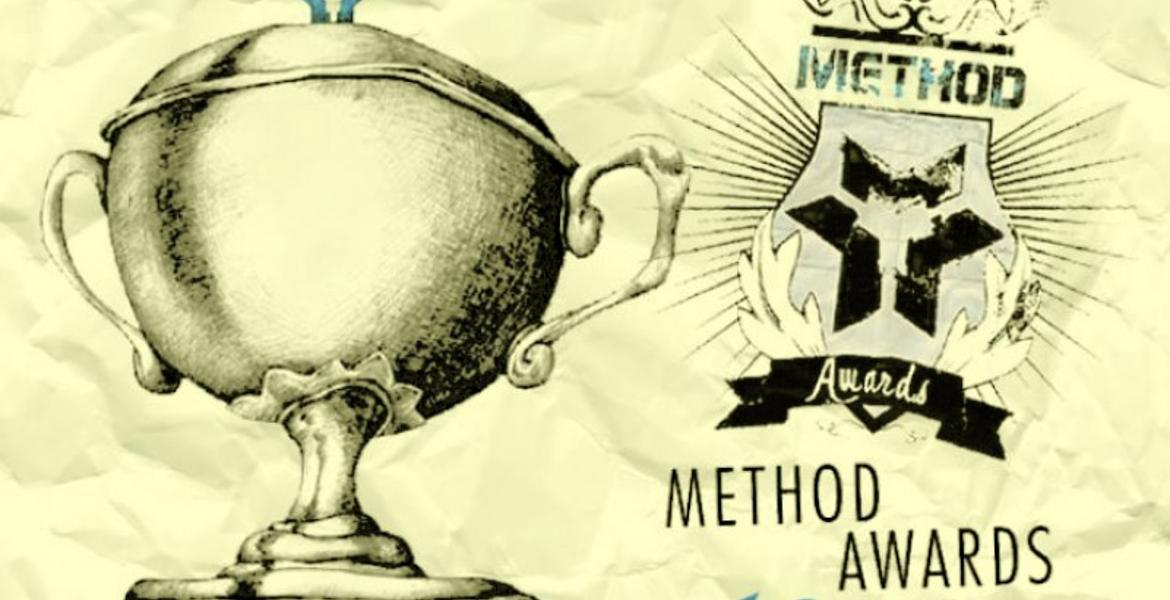 Well, even for the most die-hard shreds, the 10/11 season is pretty much a wrap, so it's time we busted out the accolades and shitty plastic trophies for this year's edition of the infamous METHOD Awards! You know what's coming so we'll cut right to the chase. And the winners are.....!!

The Moammar Gadhafi Award: Peetu Piironen for refusing to give up his top spot (on the podium) and continually terrorizing the TTR tour.

The Tigerblood Award: Mark Sollors for being more unstoppable than Charlie Sheen in the face of whatever the mountain (or the cold, mean streets) throws at him. Winning!

The Michael Jackson Award: Tyler Chorlton for poppin' nollie frontflips where ever he damn pleases and sending it to the farthest corners of the landing. Check out his latest Pirate part, this boy gets hang time like no other, EEEEEH. We can't say as much for his dance moves, but we're pretty sure he must grab his crotch more than occasionally.

The Dangerzone Award: Nick Visconti with his outfits, flamboyant moves and odes to blading you can't be surprised that we picked him as the rider closest to the Danger Zone. Plus it's the name of his show.
Runner Up: Flo Achenrainer

The Jack Kerouac Award: Gus Engle for being our favorite footloose beatnik bum. To quote Kerouac, "The only people for me are the mad ones, the ones who are mad to live, mad to talk, mad to be saved, desirous of everything at the same time, the ones that never yawn or say a commonplace thing, but burn, burn, burn like fabulous yellow roman candles exploding like spiders across the stars and in the middle you see the blue center light pop and everybody goes "Awww!" That's Gus.

The Captain Ahab Award: Nick Dirks for sporting more tats than a bored sailor and partaking in other rambunctious sailor-type activities such as boozing and cruising.

The Alexander Supertramp Award: Mike Basich for living off the grid, surviving on his own means at AREA 241 and being an all-around badass human.

The Charlie Chaplin Award: Forest Bailey for being one odd character with a bunch of hair on his lip and doing funny tricks with his stick.

The Viagra Award: Terry Kidwell for the oldest dude still bonin' it out at the ripe age of 48. But TK's heart is still young and he loves to shred since day one, Terry's on like day #12,045 at this point. Stamina, baby!

The Monopod Award,: Scott Vine this kid doesn't really seem to need two legs to kill it and after seeing his one-footed wallrides, coping slides and spins he might as well leave his right foot at home.

The Donald Trump Award: The Helgasons for getting off their asses and starting their own successful companies, making their own (very unique) movie and even inventing new tricks. True entrepreneurs. Now they just need to start working on their combovers and they're ready for a run at the Presidency!

The Friendly Neighborhood Ninja Award: Marc Swoboda cuz Marc is one of the nicest guys on the angry slopes. He's got some nasty moves which you would never guess cuz of his big ol' smile with straight enough teeth to merit envy from the English.
Runner Up: Andreas Wiig

The Julian Assange Award: The Angry Snowboarder for fighting for the truth and having no qualms about calling it as he sees it. Chapeau, man, stay angry!
Runner Up: BuoLoco

The Haile Selassie Award: Dani Rajcsanyi for starting his own religion, the Church of Cobrats, and performing miraculous moves like gaps to flat on kink rails with a stance so narrow that he could only be delivered by the hand of Jah and the Holy Ghost.
Runner Up: Jim Rippey, did you know this wild man is an ordained priest?

The Nicola Tesla Award: Scott Stevens for coming up with the wackiest, most unorthodox moves. This sleepy genius tears the doors off the limits of artistic science every time he straps in. Not to mention his stunt wood wizardry with or without trucks.

The Aerosmith Award: Xavier de le Rue for living on the edge. Dude just can't help himself from going to one gnarly peak after another…

The Teacher's Pet Award: Jamie Nicholls at a fresh-faced 17, he's way ahead of his class (he's even skipped a grade in school so you know this kid is smart too), plus he's polite, well-behaved, he stomps his tricks and he's always on time.

The Bob Marley Award: Kazu Kokubo for swinging some irie dreads off his head and sticking it to the man while keeping it clean and chronic in the pipe. The half pipe that is.

The Silvio Berlusconi Award: Silje Norendal for being a hot little muffin who's too young to butter. Oh wait, Berlusconi doesn't care!

The George A. Romero Award: Danny Larsen for being the rider most likely to have returned from the dead. This dark creature lurks the hills, looking for the next spot to slay. Plus his artwork is creepy, who knows what this dude does on the weekend he probably drinks more than beer.
Runner Up: Ben Bilocq

The Oxford Award: Hans Ahlund for worst speller ever. Just kidding, Haze! Sort of… But your blogs are dope anyway!

The Mark Zuckerberg Award: Torstein Horgmo for having the most entertaining website in all of snowboarderdom. We laughed, we cried... and Game of In Your Face is just totally off the wall!

The Axl Rose Award: Keegan Valaika for straight rocking the joint but never showing up on time or answering interviews.

The Ebola Virus Award: Jed Anderson for most contagious style, young shreds across the globe have been infected by Jed's steeze, plus he kills any spot he comes into contact with. Oh shit, now we're in trouble, he's gone airborne!

And finally, we saved the best for last:

Male Rider of the Year: John Jackson. Did you watch John J's (ridiculously, disgustingly, obscenely good) part in FUCK IT? That is some superhuman shit right there, people will be talking about this part years from now.

Female Rider of the Year: Cheryl Maas is really on a roll: first female 900 comp stomp, she is working on her own flick and she can stack that street ham on the regs. Cheryl is the real deal.

Rookie of the Year: Ethan Deiss for being a true underground hero. This kid has the talent and the charisma, and he is stealthy as fuck. He could go...alll...the...way!