Anto Chamberland is on another level when it comes to stacking shots. Not many dudes can film enough clips to satisfy two production crews and still have some left over. This winter he filmed roughly eight minutes of footage, which you can watch in the DC Raw cut below and so, decided to spread those clips across the Union team movie 'Stronger' and The Manboys movie. Don't forget the fact that this Canadian powerhouse also has two X Games Real Snow medals either. Further proof that Anto is not slowing down. In fact, he's leading the pack.

After watching the DC raw edit of all his footage a few weeks back, we realised we had to find out more. Read on below to find out his thoughts on that sacred shovelling to shot ratio, finding new spots, working with the local authorities and wall ride techniques. Enjoy his parts on the way through because you'd be hard pressed to find street snowboarding of this calibre done with the kind of ease that Anto displays.

You just released all your footage as a raw file edit. Something that is really popular at the minute, especially in skateboarding. What was the reasoning behind this kind of edit?

Long story! I signed up to film with The Manboys in the fall of 2015 then Union asked me to film for their first and only movie. I decided to give everything that I got to both projects and ended up with my footage spread over two parts and a lot of leftover footage that I thought was great. I'm most definitely very happy with both video parts, but I wanted all my footage to be in one edit too. So I asked DC Shoes Film to make something with it.  Like you mentioned it is popular in skateboarding and doing well. So DC Film brought up the idea .... since they did all the skateboard ones.

Do you ever find it frustrating that you put in so much work for an edit that ends up just a few minutes long?

I do, and I think about it very often. You put so much energy into every shot. We shovel so much, so of course, it sucks when nobody ever sees the shot. Especially this year, to mention a few the SW BS 180 (hard way) to fs 50-50 and the handplant to wallride on the church was never used... It's just crazy sometimes how a shot can be an A grade to you but not the producer... But in the end the best part to me is not who will watch it, it's a lot more about the feeling I had when I stomped! The feeling of landing something you saw yourself doing with the adrenaline and everything. God damn snowboarding you're great!

Roughly how many hours do you think you spent on your part for X Games Real Snow?

I would give an average of  18 hours per shot and the video got 15 shots. 270 hours. But I wasn't alone... for the most part we were 3 riders 2 filmers and one photographer... so it;s more like 1350 hours of mostly shovelling. Should we add all the hours driving to the spots and the hours scoping? The amount of time spent for those edits is endless. That's why the Raw cut is nice, its shows so much more than the actual shot. The rules are you have 2 months in December and January, so the snow situation this year made it really hard. The zones that I had in mine didn't have enough snow so I did struggle with time and filmed until the last day to get all those clips. Also, I took 2 weeks off for Chrismas and New Year.

What attracts you to the spots you pick?

What attracts me is the fact that I could maybe snowboard on it. Driving around and be like I think this could work. Even if everybody thinks it won't. There are two things that really get me into a spot. If it was never hit before (whatever the reason is: too big; too complicated; not enough speed) or if I see a trick that has never been done or a different way to hit it.

How did you not break both your knees from the triangle feature overshoot?

That's a good question and I don't have the answer... Is it that I stretch a lot? Is it that I work out and bike a lot in the summer? Is it that I eat well every day? Is it that I had some soft snow around the zone that I landed? Just got really lucky or that I let myself really soft at the impact and rolled over perfectly? OR ALL THE ABOVE !!!!! I don't know but thank God I'm fine.

What’s your relationship with Mat Gibo like? How did you get to know him?

I got to know him at my home resort, he is a great snowboarder, he's got a good method! He used to work full time on TV sets. Doing everything: camera, editing or colour correcting. He is a genius. Then he got bored of working in an office and quit his job to film me snowboard around the world. He is behind Shredtopia and The Manboys movie. He now has a Bronze and a Silver X Games medal. We are really good friends and we love to actually get to snowboard together without a camera!

You were obviously in the streets a lot. What’s the best way to calm down cops or other people hassling you?

It's different every time because cops, security and citizens all see it differently. You need to introduce yourself nicely and be very respectful. The first look and words you say are the key. You need to look like you belong here and that everything is normal. Then you need to quickly decide (depending on their vibe) if you lie that you have permission or if you say you're pretty much done, that you don't break anything and that they need then to let you finish. When it gets really hard and they don't want to let you know I sometimes pull the "I'm a firefighter" thing and show my badge! I've been working a lot with Frank April in the last few years and I got to say he's the best at it. He will get us permission for anything. He should be a lawyer.

The water slide feature was sick, where is that and did you have any difficulties in getting that shot?

It's located near Montreal. We didn't have permission and it was a real mission. We had to walk in the wood for 2 kilometres, then go over a barbed wire using a ladder and blankets. That's with the winch and the rest of the gear... When we made it there we had all the time in the world... I like that shot a lot. I was just bummed the winch couldn't bring me any higher...gravity is so insane to battle... That thing was really high, I wish we had more angles.

Let’s talk about the Union Team Movie, because, let’s be honest, it was insane. How does it feel to be part of that crew?

Being part of Stronger was an honour. The best part was by far to go on the stage at the Transworld Awards with T Rice and Kazu to get the trophy for the movie of the year... To answer your question well "how it feels". It's insane because I'm a big snowboard fan and I love snowboarding. I'm doing it because I love to learn new tricks, go bigger and push myself. The result was never for anybody, it's for me. It's my need to push myself and that's how I feel alive. Sometimes I forget that people are watching and I forget that I'm now a professional on the DC Shoes Global Team... I'm so in my head thinking about spots, next trick and all that and I space out of where I made it too. So when I got the call from Union and they ask me to go on a trip with Scott [Stevens] and Dan [Brisse] I'm like shit, some people like what I do so much that they want me in there. It's unreal. It was the same when X Games contacted me the first year...

You obviously hit some spots with Brisse, was it a natural progression to ride such massive spots? Or did you have to push yourself a lot?

I didn't think I had to push myself too much. In a way, it was mostly hitting spots that I found and that I was comfortable with... I'm not hitting spot to impress anybody, I feel like I'm hitting those spots because it's a little bigger and or better than the last year. You know it's more about pushing myself than trying to show something to other pros.

Do you have any secret wall ride techniques you can share with us?

There are two very important things with wallrides. Make sure the wall slides, ice it up as much as you can. Be careful - sometimes the sun hits the wall so hard what the water doesn't even freeze on it. If that happens I reschedule the shoot to a cloudy day or earlier in the day so the sun is not hitting on it.  Then the angle of the jump is the key. you don't want it parallel. It's weird but you want it with an angle towards the wall. In that way, it is also easier to bounce off with a trick. 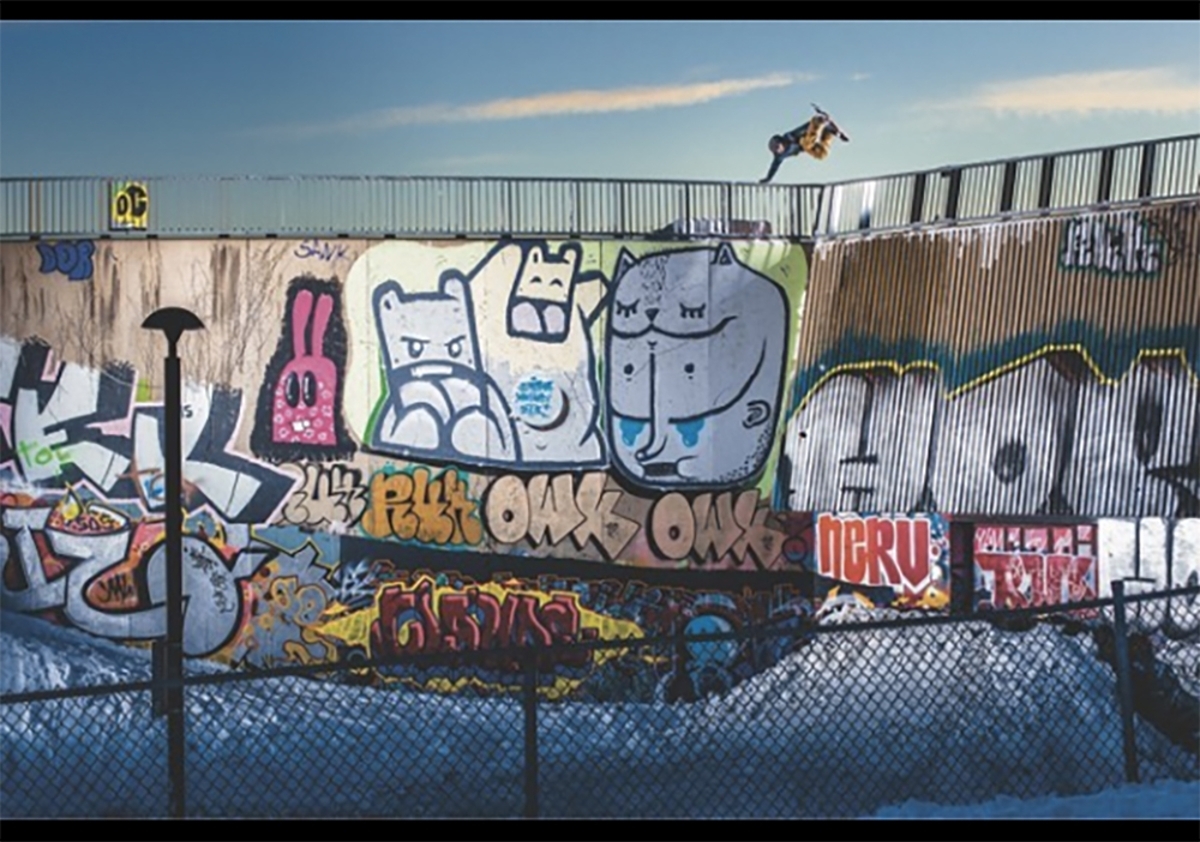 What are your plans for summer? Lots of training or lots of chilling?

I don't really chill ever. In the summer I work as a firefighter and my free time goes to surfing, skateboarding, camping and hiking. I like to work on my house too and do some remodelling. In terms of training, I bike a lot and work out at the fire station too. I don't really train for snowboarding. Every summer I go to some summer camps and stuff like that. I'm currently in Mammoth for a Shredbots park shoot for #R3BOOT, the third movie.

Mostly Drinking with the DC Crew

A conversation with Sebbe de Buck