If you didn’t know about them already, Boardsport Source are the guys who have their finger on the pulse of the European boardsports industry. From production to retail (and everything else in between) they know how our industry runs better than anyone else. We reached out to the editor of the mag, Harry Mitchell-Thompson, to get his thoughts on what COVID-19 has been doing to the snowboard industry, what it’s going to mean for us in the future, and what actions we can all take to help support and sustain it. So do us a favour, and pay attention to what he’s got to say.

Hi Harry. You’ve been speaking with a lot of different people across the industry. How are people feeling right now, and what’s your current impression on how things are looking?

At the moment there are a lot of unknowns. No one knows how long lockdown will last and no one knows what the industry (or life in general) is going to look like on the other side. What we do know is that brands have been increasing their Direct To Consumer (DTC) efforts (selling products on their website instead of selling through local retailers) for years now, and this lockdown is only going to accelerate that process and allow brands to hone their collections accordingly.

I’ve been speaking with retailers, brand directors, sales agents, distributors and manufacturers and I have presented insight from them combined with my own insight for your readers below.

What will be the biggest overall challenges for us to face?
Depending on how deep you want to go into it, I think the immediate issue facing the snowboard industry will be the early finish to the winter season; meaning everyone from mountain restaurants, bars, hotels, ski resorts themselves, shop owners and employees will face a serious cut in revenue/wages. That’s the immediate effect we’re looking at.

Next up we’ll be looking at something the industry likes to call an ‘inventory’ issue. This means all the gear that snowboard shops weren’t able to sell this winter, immediately becomes out of date next winter. While some folk don’t mind buying a snowboard from last season at a discounted rate, us snowboarders usually like what’s hot off the press, and not to mention retailers and brands need to sell snowboards (and boots, bindings, goggles, etc) at as close to the full price as possible. In a world where the consumer’s always after a good deal, the bigger the discount a product is sold at, the less ‘margin’ (profit a shop makes from a product). If the margins are small it means the shop has to sell more of them to make money. Selling more of anything means more work, more production and more shipping, which isn’t good for the retailer, the brand or the environment.

So if the two stages above are the short-term and mid-term problems, the more long-term problem will be the result of the economy shutting down for 2-3 months. Our capitalist system wasn’t built to shut down for this amount of time and the knock-on effects will completely re-shape the world as we know it. Some countries will be looking at unemployment levels of 30% (a normal high unemployment rate is usually around 5-8% in Europe, but a bit higher if you’re Spain or France) and that means a lot of people without money to spend on snowboard gear.

What action can shops take to help themselves in this situation?

In terms of financial help from the government, this varies by country, but so far the governments’ help has been slow in coming despite big early promises. Shops with not so much cash in the bank may very well be struggling to pay outstanding invoices and wages.

Everybody is used to shopping online via their phone, either direct from brands or direct from the likes of ASOS, Amazon, Zolando etc, because ordering a t-shirt or pair of shorts online is easy. However, buying snowboard boots is something that should never be done online - it requires the assistance of a well-educated snowboard shop employee to know the nuances of each brand’s fit in relation to someone’s foot, pressure points etc. It’s thanks to this and the high-ticket nature of snowboard gear that snowboard retailers have largely remained offline businesses. Many of them now have web shops, but – and snow shops will be the first to admit it  - they aren’t anywhere near as good as they should be.

So, while many ‘bricks and mortar’ (i.e. physical shop) businesses have pivoted to sell their gear over their website, snowboard shops just don’t have the required systems to do this.

However, we’ve been speaking to a number of Europe’s finest core shops* and we’ve heard some interesting initiatives being carried out to keep the stoke high during lockdown:

In what way have manufacturers been affected so far?

We tackle this in depth in this SOURCE article where we speak with a number of the world’s largest factories. Looking at things top line, the majority of factories won’t be affected production-wise, because the European and Dubai-based facilities introduced strict health and safety procedures from the start, including disinfecting work stations, hand sanitizer and masks as standard, regular employee temperature checks, social distancing procedures (including during food breaks) and quarantine facilities for employees returning from high risk countries. Those factories still closed during quarantine don’t foresee any disruption with delivery times.

The Chinese factories luckily closed down coinciding with the Chinese New Year, meaning only one week of regular business hours were affected by the lockdown. Looking bigger picture and outside of snowboarding, the problem we’re going to stumble upon now is that with China and South Korea back open for business, it’s not a supply problem, but instead a demand problem being faced as the western world cancels and dials down future orders.

Is the snowboard industry better equipped to deal with this situation than other boardsports industries?

I think it is. Purely in terms of it being a one season manufacturing cycle. Looking at the apparel industry, for example, a brand in that space will have currently been due to deliver products for spring/summer to closed retailers and will then also have deliveries in autumn too. Whereas the snowboard industry managed to get December and January in the books this winter and now has all summer to see how the economy pans out for other industries in order to make better plans. There’s also a hopeful notion that with many snowboarders missing time on the mountain this winter, that next winter will see pent up demand and lots of snowboarders heading for the hills.

Interestingly, skateboard hardgoods sales have been strong during lockdown with people still skating creatively at home (check out an article we did featuring German shop OG Skateshop) and surfboard sales during the last two economic downturns were actually strong, with people not at work so spending more time in the ocean. It’s too early to tell this time round, and with people not allowed on beaches we’ll have to wait and see how that market pans out this summer.

Are there any conscious actions that consumers can take in order to help the industry?

I think this is the big one. I feel like core snowboarders know the importance of the local snow shop to the culture of snowboarding. It’s not just about providing good service and buying your gear, it’s a place to hang out and feel part of something special. Somewhere that puts on killer events, rail jams, park comps, movie screenings and hooks up local groms to ensure they’ve got the kit they need to progress. But not every snowboarder is aware of the cultural nuances a shop represents, so it’s our job as snowboard media (and snowboarders in general) to remind people of this as much as possible.

Moving on from this, snowboarders should always try to buy local wherever possible. Is buying a €400 snowboard for €40 less online really worth it? For that extra €40 you have to wait a couple of days for delivery, whereas buying in store is instant and also lets you know you’re supporting the local scene. 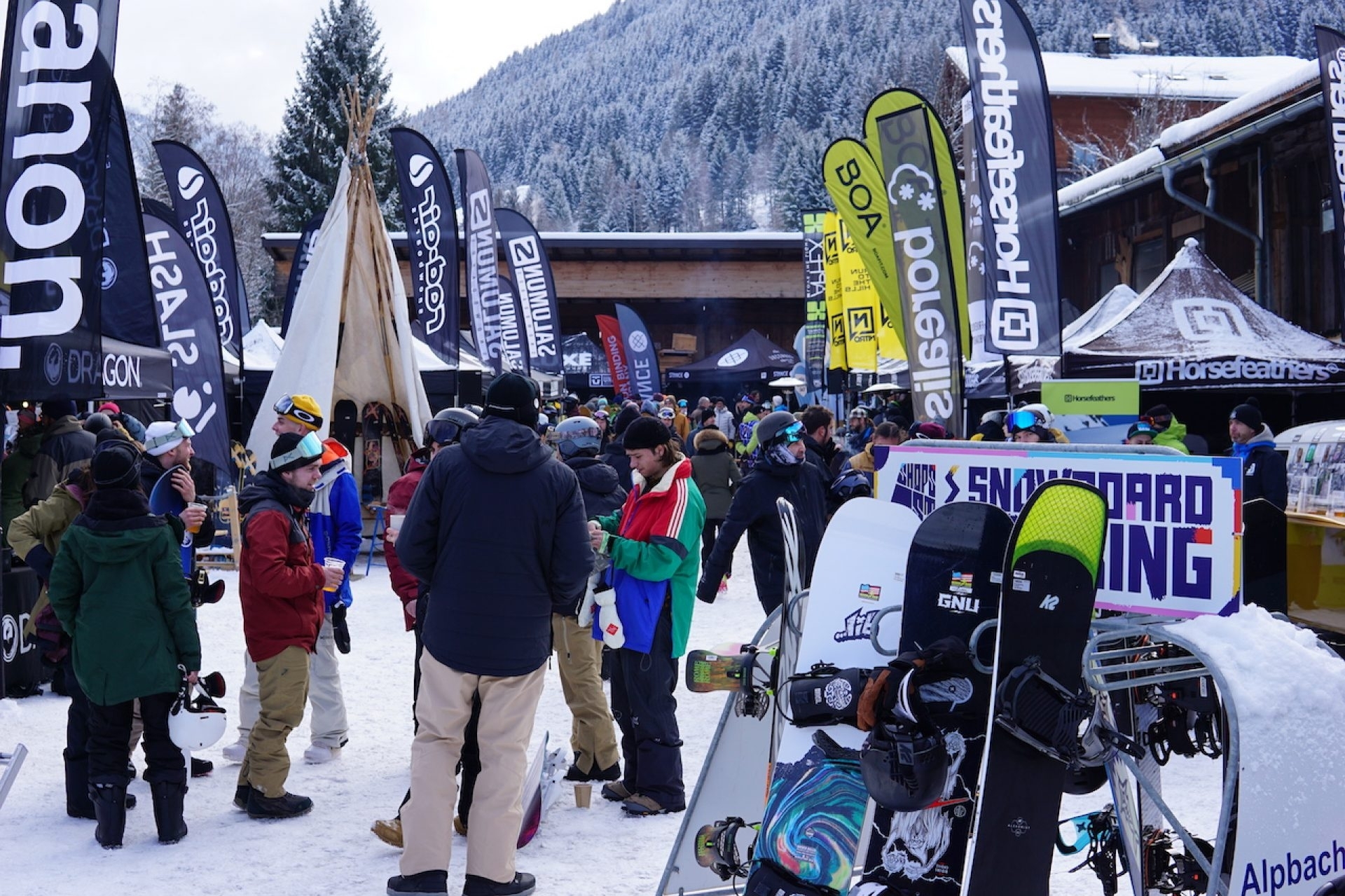 Where do you think we’ll be in a year’s time?

Where I hope and where I think we’ll be in a year’s time are two different things. Hopefully we’ll be back at it with minimal disruption and a killer snow season to make up for the lack of snowboarding this winter. I think no matter what, the landscape will change for next winter at least in that people will snowboard much more locally. Bearing in mind that most of Europe don’t have to cross a border or fly to get to the mountains, I think we’ll see a lot more local shredding.

There’s certain criteria I use when qualifying a retailer as one of Europe’s “finest core shops”. They’re well respected by brands and other retailers for their approach to customer service, product selection and partner brands, they merchandise well, don’t go on sale early in the season, they support their community with events and athlete sponsorship and act as hub for the local snowboard community.*

Make sure to check out the Boardsport Source mag and website for more industry articles, news and interviews. We’re all living through uncertain times, so we’d all do well to keep ourselves as informed as possible.